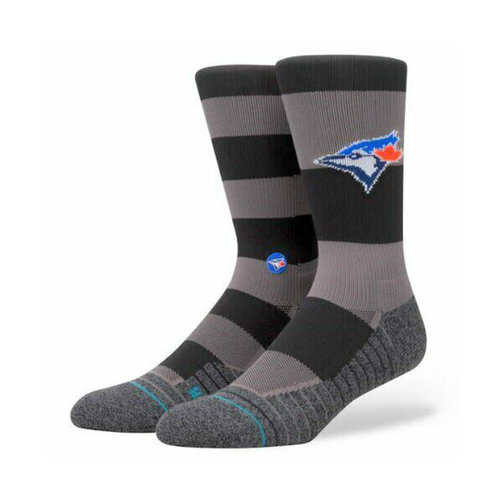 To catch a good game, head north. Since making their debut in 1977, the Toronto Blue Jays have had some incredible seasons--including back-to-back World Series titles in 1992 and 1993. In addition to snagging two American League pennants, the Jays have won a handful of East Division titles and served as home to greats such as Roberto Alomar, Rickey Henderson, Paul Molitor, and Dave Winfield. Cheer on the team in Stance Blue Jays Socks.

Product Care
Machine Wash in 40 °C / 104 °F.
Avoid Bleaching or Ironing the socks.
Socks will last longer if you keep them out of the dryer.

You will receive free shipping on all orders over C$50.00 to anywhere in Canada or the United States. For orders under C$50.00, a flat rate of C$12.00 applies. All items are shipped directly from our Nanaimo based store via Canada Post and typically take between 5-7 business days to arrive (United States will be longer).

If you live nearby or visiting Nanaimo, in-store pick up will always be a free option at our brick and mortar location. All our products are available for same day pick-up (no need to wait for email confirmation once the order has been placed!).

Our retail store is located at 206 Commercial Street in downtown Nanaimo (V9R 5G7, British Columbia). Feel free to drop by during our opening hours, 10:00am - 5:00pm 7-days a week.

We accept all returns, including change of mind returns, in exchange for store credit. The products must still be in brand new condition (it’s ok if you’ve tried them on!) unless you’re returning for warranty or defective purposes.

Unfortunately for hygiene reasons socks and underwear are unable to be returned. For all other returns, we appreciate being contacted at 250.716.3331 or [email protected] within 30 days of receiving the product to initiate a returns process.